Very excited to share the catalogue info for Derry City!

(Note: If you want to buy the book, check here regularly, because I post discount promo codes from the press as they become available. The paperback won't be out for awhile, and the hardcover is pricey.


The book traces the social and cultural history of Catholic and nationalist Derry from the end of the 19th century to the 1960s through the lens of memory and thus explores how engagements with memory might help us better understand history. Mapping memory work and historical consciousness, I argue through this book, illuminates a deep reservoir of a community’s experience and makes visible battles that were waged quietly, out of the limelight over long periods of time.

When they were producing formal historical accounts, local chronicles, telling ghost stories and transmitting folklore, staging commemorative activities, performing engagements with the past, leaving traces on the cityscape, preserving material culture and more, Derry's residents charted contemporary experiences just as much as they reflected on historical events. This book investigates and contextualizes these dances with the past in order to illuminate aspects of Derry in the years before Partition and during the decades that saw Catholics and nationalists negotiate the challenges of being seen as a "suspicious minority" in Northern Ireland even as they grappled with estrangement with those on the other side of the Irish border and built a coherent community identity.

It is an academic book, yes, but it is also a book of stories.  It features iconic figures from the city's past, people like Father Willie Doherty and Frank Curran, political figures like Eddie McAteer and  Patrick Crampsey, Paddy Shiels,  and Walter Bernard........it tells stories about the Féis Doire Colmcille and the AOH and St. Columb's Hall.  There is music and storytelling and family drama and children's games and ghost stories.  The GAA and the Gaelic League and Éoin McNeil and the IRA all feature.....Liam Brady tells the story of the Irish War of Independence from a Derryman's perspective.

The books takes a closer look at Derry from the 1890s through the 1960s and examines the ways Catholics and nationalists drew from the past to orient themselves, to galvanize around contentious politics and, in many cases, to maintain an Irish identity despite the realities of living in (what became after 1922) a partitioned state. The project took shape when I realized that in the Catholic-majority city, the memorial landscape before the period we know as the Troubles didn't seem to tell nationalists' stories or mark their spaces.

I was inspired by Diana Taylor's idea of the repertoire (as opposed to the archive) and started to look for historical evidence of memory practices that were performed through rituals, oral traditions, performances and through local history chronicles.   When looked at from that angle, memories wove through nearly every aspect of Catholic and nationalist life in Derry.  This book is an effort to investigate the threads on their own, and also to demonstrate the ways they came together as testament and guide for community life.


Here's a blurb from the intro:


In Derry, Catholics simultaneously invoked, drew on, and constructed the past through memory work— through discussions, writings, displays, commemorations, festivals, protests, religious celebrations, memorials, oral histories, personal accounts, and community conversations.[i]  Paying attention to memory reveals how Catholics drew from the past to build places (neighborhoods, institutions, frameworks) that they could retreat to and organize from during the years between 1896 and 1969. These years are not arbitrary—1896 saw the city’s first political gerrymander, ward redistricting, to achieve unionist political objectives as the Home Rule movement and the Gaelic Revival took on steam; 1969 saw not only the start of the Troubles and arrival of British troops in Northern Ireland but also the dissolution of the Londonderry Corporation, which marked the end of the era of political gerrymander and the decline of unionist political power in the city.  This process of mapping memory work and historical consciousness illuminates a deep reservoir of a community’s experience and makes visible battles that were waged quietly, out of the limelight over long periods of time.[ii] As such, this story of Catholic and nationalist memory in Derry contributes to broader histories of Ireland and Northern Ireland by inviting a reconsideration of the decades between partition and the Troubles. At the same time, it offers insight more broadly into the gestures, discourses, and rituals communities draw on to weave threads of historical consciousness out of their experiences, aspirations, and fears.


Long before the establishment of the border between Northern Ireland and the Irish Free State, Catholics were seen as “other” by Protestant settlers who developed and laid claim to Londonderry from the Plantation period onward.   Independence and the establishment of the Free State only three miles from Derry’s city center ruptured ties with nearby County Donegal, the place where many Derry Catholics had roots.  They created and nurtured an urban Irish Catholic culture from these experiences of difference.  Although they held a demographic majority since 1850, Catholics’ political representation was steadily reduced through periodic and strategic use of gerrymander until the dissolution of the Londonderry Corporation in 1969, constraining opportunities for political voice, geographic mobility, higher education and public employment.  Largely divorced from traditional politics for much of this time, many Catholic nationalists in Derry shaped and framed identity through relationships to home, church and neighborhood; they only episodically participated in explicitly public and political realms; thus, the city’s twentieth century cultural history of nationalism and resistance has been largely overlooked.  Yet, this history is crucial for understanding  “the interwoven politics of community, struggle and power” that shaped nationalists’ perceptions of and commitments to civil rights and ultimately ushered in the era of conflict the world came to know as the Troubles.[1] More broadly, it also invites a rethinking of the longstanding trope of an Ulster Catholic “culture of grievance” that has been used by historians for decades to describe, and indeed, define, Catholic attitudes towards public life in Northern Ireland. 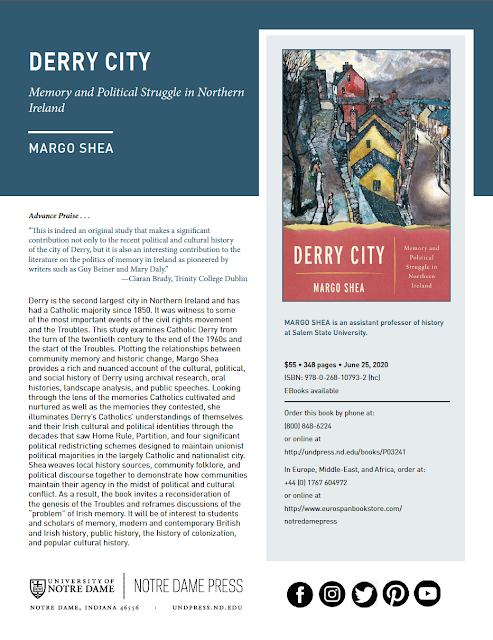