- June 14, 2014
A lot of really wonderful things happened in Derry, or Londonderry, (or Legenderry even,) last year when it became the first UK City of Culture.  For a small city, it's been big at attracting interesting and creative people; last year there was funding and impetus for people to continue and build on that tradition.

One of my favorite projects was created by two photographers, Andy Horsman and Paul McGuckin.  They rephotographed iconic Derry photos, many taken over 100 years ago.  Using a large format camera that would have been used to take the originals (5" x 4") they did some editing magic to knit the images together in surprising, poignant and occasionally haunting ways. You can check out their awesome blog to learn more about them, their technique and the evolution of the project. A montage of their work mashing up more contemporary cityscapes in Derry with scenes of the civil rights movement and the Troubles can be found here, at the BBC History website.

I didn't know about the pictures and so I discovered them serendipitously. Many of the images were hung, mural-like, in the space  I was exploring --- the most-dramatically changed aspect of Derry since my last visit: the site of the former Ebrington Barracks, which has been transformed into a public space that is commemorative in a deliberately pageantry-infused way. The longterm plan includes spaces for residential, commercial and cultural use.  It is connect by a pretty awe-inspiring suspension footbridge that links the city center to Ebrington.

Historians say the site at Ebrington was where King James II's troops were camped during the Siege of Derry (1688-'89.) Finding it a good site, it was used as a barracks from the mid-eighteenth century, mostly housing locally recruited regiments. It was a parade ground in the 1840s.  From 1939, it was a navy base until 1970, when British soldiers used it as their barracks during the Troubles until 2003.

As military history (like most history) is often divisive in the city, and because the River Foyle, which runs between Ebrington and the Guildhall, was long seen as a kind of dividing line between the cityside and the Waterside, Catholic nationalist and Protestant unionist, this is symbolically a big step.  It's also an important public space.  Northern Ireland has historically had precious few of these.  Even before the Troubles raised fears of large gatherings, public spaces were limited in a congested city where order demanded that everything and everyone have a place. 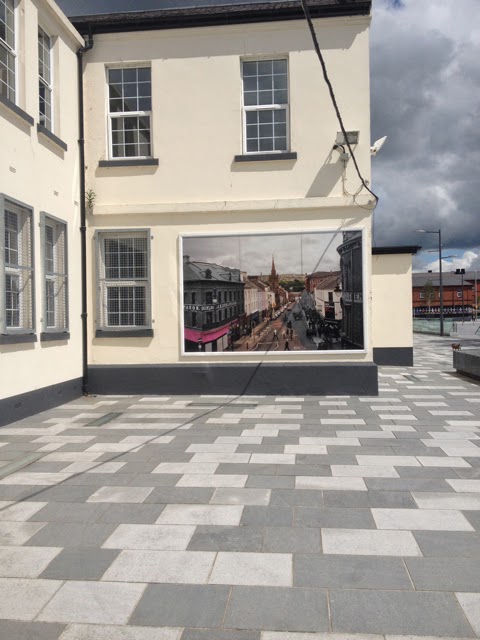 The first image I came across made is of the Carlisle Road, pictured here in the late 1800s, when my research starts  -- knitted with the street  today.

Here it is as I approached.  Below is a close up of the image.  You can see the historic cityscape, replete with horses and carriages on one side, cars on the other.  People from the past and those of contemporary Derry "meet in the middle" whilst crossing the street.  Today's developed Waterside sits above the street on the opposite side of the Foyle. 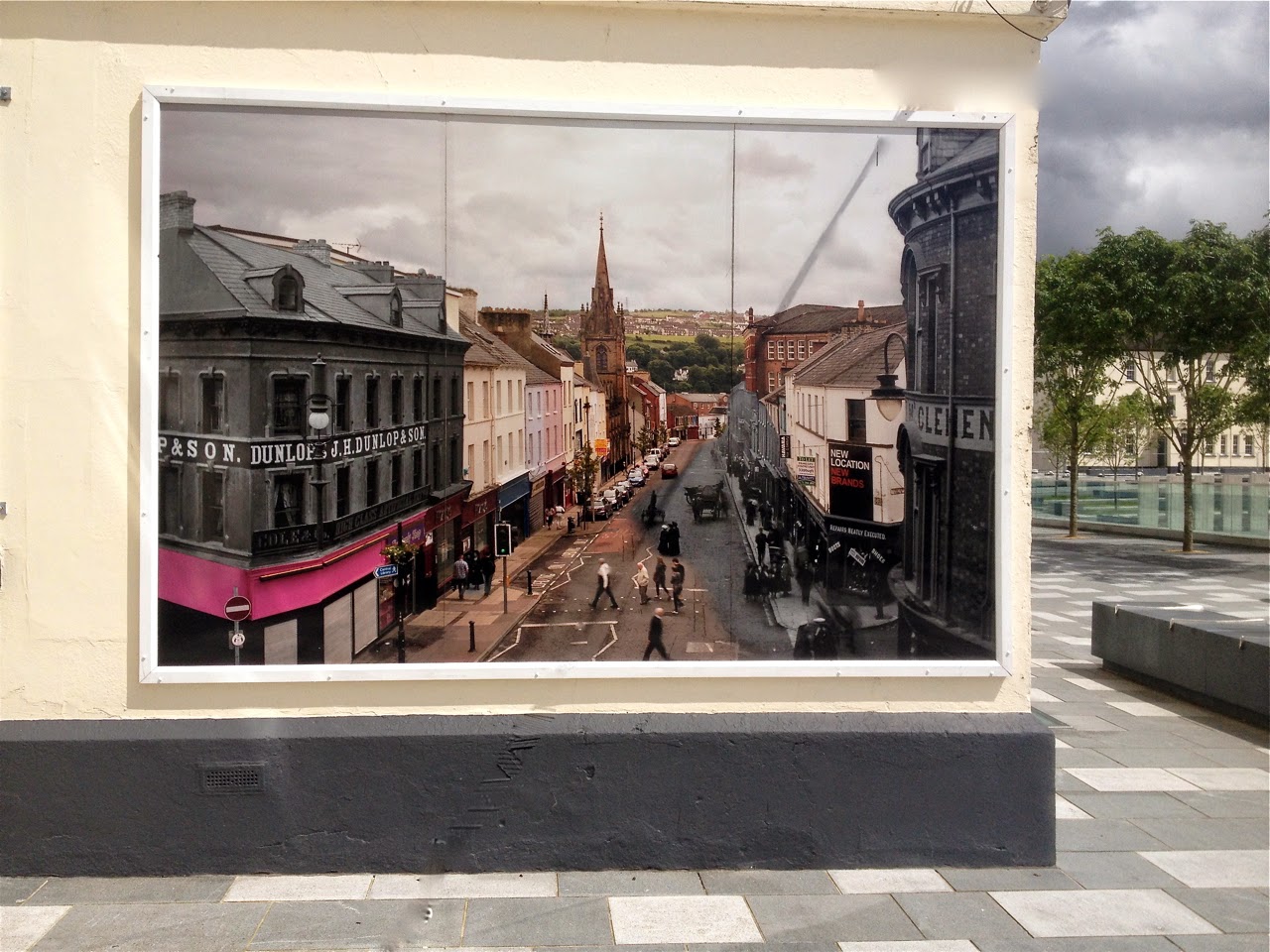 As an historian of Catholic and nationalist derry, there are two images I find particularly captivating.  They are evocative as well as beautiful. I find them both deeply intuitive and suggestive about the histories of the city for Catholics and nationalists.

Here is an image of the Diamond today, knitted together with an image of a 1930s hiring fair in the front of the frame.  Hiring fairs took place several times a year in Derry.  Here's  a quote about in the book draft about "The Rabble:" 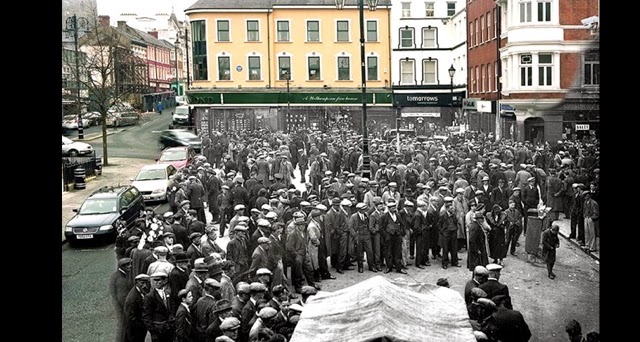 The rabble days, or hiring fairs, while not feast days, were a traditional part of Derry life.  On the three successive Wednesdays after the 12th of May and the 12th of December, the Diamond came alive as farmers from the country came into town to hire on extra help for cutting turf, laying potatoes, pulling lint or other labor-intensive work.  Children as young as eleven were hired out as live-in help; some Derry families sent their children to earn much-needed money, but rural families also sent children who could be spared to Derry for the fairs.   Wages were measly. The best paid received between six and nine pounds for six months of labor, but they were the fortunate few. Others had parents who were willing to send them out work simply for food and a place to sleep, often in one of the farmer’s outbuildings.


For those being hired out, it was an unpleasant experience, similar to an auction.  Patrick Duffy, who worked as a hired hand in the thirties, did not get hired out at the fairs himself; however, he remembered the scene well, “Ye’d see boys in, them clapping hands, “I’ll give you so much.”  And then them feeling your hand, feeling your muscles.  Ye were tested, boy.”


In 1970, as the Troubles ignited, one of the Derry men who has inspired me the most, Seamus Deane, wrote about the hiring fair as shorthand for a long history:

My parents remembered the hiring fairs of the 1920s.  They took place in the Diamond and were apparently a sight to make anyone with a conscience wince.  Children who spoke no English were hired out to farmers and householders who spoke no Irish for 6 a year, payable upon completion of the work.  I remember the ‘50s  and one St. Patrick’s day in the Diamon when Eddie McAteer and the Nationalist Councillors turned down Shipquay Street, tricolour aloft, to face a brutal baton charge which sent us all catapulting through the streets.  Then came October 5th .  What had these events in common?  People bartered, people battered.


I suppose it relates to the other picture that I find moving.  In it a young man looks over Derry's walls into the Bogside of today. He stands where an army lookout tower stood until 10 years ago.  In his line of view are the small homes of "old Derry," with George Walker staring down from his plinth as the talisman of Derry's unionist and Protestant history and hero of the 1688-'89 Siege of Derry.

Homes that were crumbling, damp and overcrowded, that themselves became iconic in the histories of political gerrymandering and poverty. (And when they were finally destroyed, an easily surveilled landscape for the British Army took their place, but that's another story.) Walker was "dislodged" from his pillar by the Provisional IRA in 1973. Only his head survived; it is on display at the Apprentice Boys Hall. 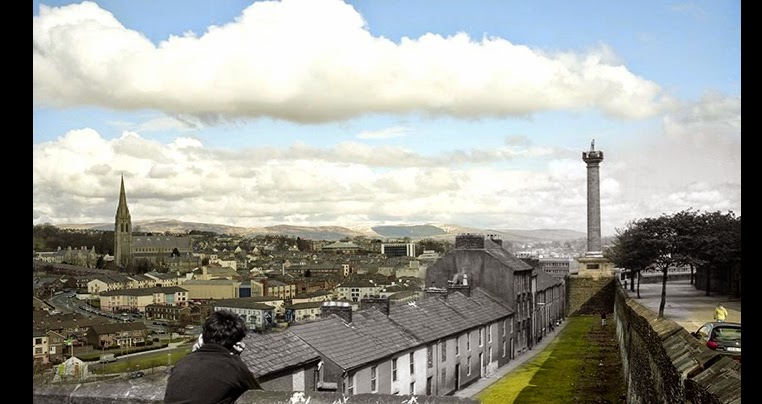