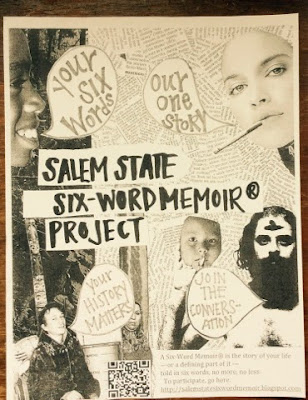 In 2014, I organized and facilitated a student-led project that was initiated as a result of work we did in my Intro to Public History course on memory, memoir and public history.  We mobilized the campus to contribute six-word memoirs that tell the story of their lives, or a defining moment in it.

This is the first time I had a class in which 90% of the students were actively engaged in a project that took them outside the classroom, forces them to think on their feet, interact with diverse others, be creative and get things done.  We learned by doing. We've marketed the idea.  We reached out to classes, organizations and faculty and staff.  We  held bake sales and gave away cookies.  Once we collected hundreds of memoirs, we decided how to curate them.  And then we create installations and exhibitions all over campus --- from the library to the restrooms.

You can read six-word memoirs and find out more by clicking here.

*Exciting news! The City of Salem will conduct a city-wide Six Word Memoir Project throughout 2017 through the Salem Award Foundation.   So happy about this. 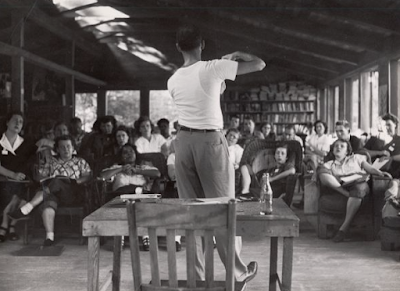 My Intro to Public History and Place-Based Research Methods students at Sewanee: The University of the South have researched the history of the famed Highlander Folk School in nearby Monteagle, TN in order to develop a historical walking tour of the site that was home to Highlander from 1932-1961.  (In 1961, Highlander was forced to close, the property was put into receivership, ultimately forcing its leaders to move to New Market, TN to reopen in the late 1960s.)

Many of the original buildings burned down or decayed.  In 2013, the Tennessee Preservation Trust purchased the Library and other key parcels and are currently trying to organize local, regional and national stakeholders to preserve the site and put it to use in ways that honor its history.  Working with the TPT, we engaged in the intertwined work of placemaking and historic preservation.  We've found that many area residents want to know more about the site and its history and so our hour-long free tours not only bring mission-driven programming to the site but also invite local perspectives, highlight what a special historical site is in our midst, clear up confusions about allegations of Communist indoctrination and even envision a future for the site together. 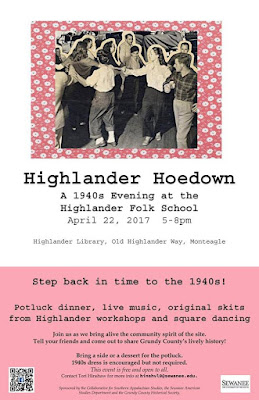 The Highlander Hoe Down

When my students and I organized walking tours of the Highlander site in 2016, sophomore Tori Hinshaw took special interest interpreting the musical and theater programs at Highlander.  She's a Theater and American Studies major and she and I were both moved by the regular comments from local residents about how Highlander was home to Saturday night hootenannies and hoedowns as far back as the 1930s.  People would gather to play music and callers would lead square dances.  Bonfires and sing-a-longs and storytelling was not something just for people who came to Highlander for a workshop.  It was one of the ways the school became part of its neighborhood.

Tori decided to do a re-enactment of a Saturday night at Highlander; it took place April 22, 2017.  I was her supervisor and the production person.  Over 100 people came out in the pouring rain for a potluck supper and a square dance at the Highlander Library.  Once again, the building rang with laughter and song.  It was a great night. 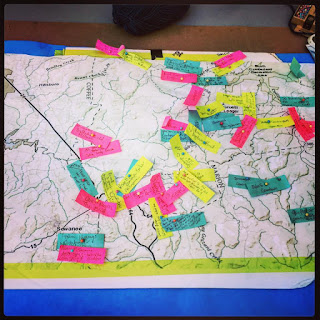 Around Here: the Places Project is a digital project that collects, saves and shares stories of places that matter to the people who live and work on and around “the mountain,” south central Tennessee’s South Cumberland plateau. Its aim is to create a very local crowd-sourced map and exhibit that shares knowledge and experience and reminds us why place matters, making local and “small”  heritages a visible and shared expression of history and memory.  In a region defined by isolated micro-cultures and shaped by discourses about its identity constructed by outsiders, the project both brings voice to local people on their own terms and encourages a shared understanding of place that does not deny or minimize the importance of hyper-local identities and the forces that have shaped them.  By creating a living digital archive of place from a diverse array of community members’ perspectives — from the seventh generation local to the newly arrived student, the Places Project contributes to numerous ongoing community initiatives on the plateau.  It will serve as a tool for grant-writing, tourism, marketing, environmental stewardship and conversations about cultural and historic similarities and differences among the communities and individuals who share this mountain and together will build its future. Around Here takes one important step toward discovering how our shared attachments to this place, along with our diverse knowledge and experiences, can make this mountain flourish.

Audio Storytelling
Teaching Audacity reminds me that public historians seem unnusually preoccupied with "beginner's mind."  We are always trying new things.  And we are generally not great at them.  But I think it is part of our practice --- and it also keeps us humble.  Reminding ourselves what it is like to learn new things and to be horrendously clumsy at many of them is good training for greeters at the wide open tent that is public history.   Here is an audio story I  made to help my students understand some of the tools we can use in Audacity: Listening to Mom's Voicemails. 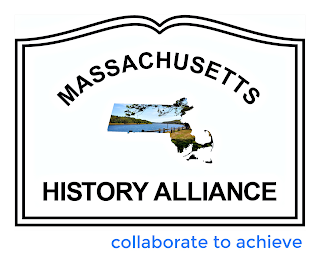 Massachusetts History Alliance
I serve on the Board of Directors of the Massachusetts History Alliance. Founded in 2017 as a means of institutionalizing the network and collaboration of Massachusetts history and heritage organizations, the MHA is a volunteer-run and member-driven advocacy and capacity- building organization.  We put on an annual conference, act as a communication hub and connect people to one another in the service of doing public history as well as we can, often with limited resources.  In 2019, my students and I initiated a fact-finding initiative, piloting a survey with 45 area heritage organizations to discover more about our membership and their thoughts on the MHA.

Ties to Home is a public history project undertaken in collaboration with the Bosnian Community Center for Resource Development in Lynn, MA.   Using objects they were able to bring with them from home, it highlights the stories of political refugees from Bosnia, Somalia, Nepal, Bhutan., Iraq and other areas rocked by political turmoil and violence.

Refugees were invited to share an object and to talk about its significance to them.  By promising anonymity and avoiding the treacherous territories of testimony about political violence, the project allows objects to speak.  It aims to offer insight into refugees’ experiences and to highlight their resilience without dredging up painful memories or exacerbating vulnerabilities. 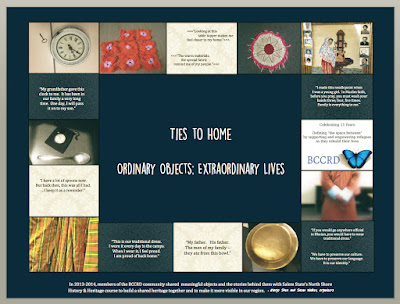 The original plan was to create an exhibition using images of the objects and quotes and then contextualizing them with information about the political context that shaped refugees’ experiences.
We ran out of time and person-power and settled for something simpler:

Ultimately, we used material culture to explore several questions, including – how to represent refugees who have no material traces from home, how to tell stories without risking confidentiality and
anonymity, how to work effectively in collaborative ways across cultural differences
and how to mitigate deeply held suspicions and fears of outsiders and figures of perceived authority.

Conversation on Sewanee Signs and Symbols 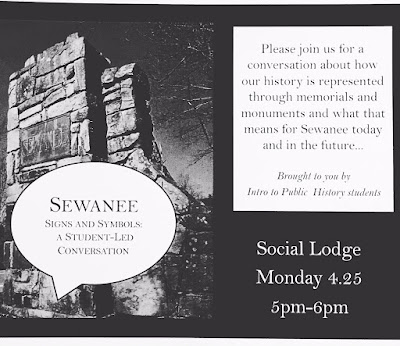 My students, in 2016, hosted the Conversations on Sewanee Signs and Symbols event and prepared short presentations about three controversial memorial sites on campus, Morgan's Steep, the Edmund Kirby Smith Memorial and Hardee-McGee field.

Students had a chance to talk with each other and in a group about the meanings of symbols of the Confederacy and to discuss possibilities for continuing to think about how we come to terms with the institution's past.

It was not an easy conversation, but a very important and necessary  beginning to a broader and deeper process of reckoning with race, class and all kinds of difference in our community. 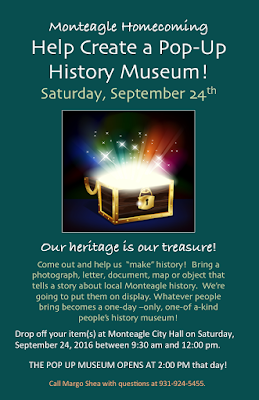 My students from my Place, Memory and Identity course and I organized a series of events to celebrate local community history as part of a larger annual festival, Mountain Homecoming.  We  hosted a pop-up museum, a series of lightning talks from local historians on the theme, "Things You Didn't Know about Monteagle's History" and a collection booth for the Places Project.  It was exciting and a little bit overwhelming to have three things going on at the same time, but in the end, it was a really good experience all around.

I think about local history as an idea all the time.  I am really loving the chance to be involved in celebrating it and presenting it for a public audience who may or may not think about history.   And as a learning opportunity, it is great for my students.  Questions like, "How do we get people to come out/contribute/participate?" and "What is it about the past of their community do people really care about?" are much more interesting in practice than they are in theory.

In response to the COVID-19 pandemic, together with friends and colleagues, Historians Cooking the Past was created as an ad-hoc virtual kitchen for storytelling and cooking.  We invited oral and public historians, as well as storytellers throughout the world, to share a food memory and a recipe that reflects on the pandemic. By "cooking the past," we meant two things. First, we wanted to examine our own compulsion to draw on familiar recipes in these troubled times. Also, "cooking," as in "playing with" or "altering," spoke to creative efforts to both rethink and reframe our own engagements with stories of loss, community, family, and food heritages.  We collected almost 100 stories and recipes and the international, crowd-sourced project developed a strong following.