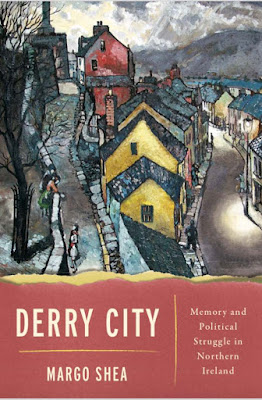 I am excited to announce that my book, Derry City: Memory and Political Struggle in Northern Ireland, has been published recently by University of Notre Dame Press.

(Note: If you want to buy the book, check here regularly, because I post discount promo codes from the press as they become available. The hardcover is pricey.  Also note: I don't plug the book for personal gain -- a first time author with a university press  in the US is likely to see anywhere from $0 to $800 from their book. However, I want my book to get to paperback, which would make it more affordable and accessible and it needs to sell a certain number of copies for a paperback to be issued.  Why?  See under: first time author with a university press. :))

You may read a review of the book from Choice Reviews here.

Enter promo code 14GIVEBKS in the shopping cart at Notre Dame Press to redeem 50% off your purchase and free shipping in the domestic U.S. until December 6, 2022.)

The book traces the social and cultural history of Catholic and nationalist Derry from the end of the 19th century to the 1960s through the lens of memory and explores how explorations of a community's memory might help us better understand history.

Whether they were producing formal historical accounts, narrating local chronicles, telling ghost stories, singing songs or transmitting folklore, staging commemorations, leaving traces on the cityscape, preserving material culture and more, Derry's nationalist residents in fact charted contemporary experiences just as much as they reflected on historical events. This book investigates and contextualizes these dances with the past in order to illuminate little-known aspects of Derry in the years before Partition and during the decades that saw Catholics and nationalists negotiate the challenges of being seen as a "suspicious minority" in Northern Ireland even as they grappled with estrangement with those on the other side of the Irish border and with their own Irishness.

It is an academic book, yes, but it is also a book of stories.  It features iconic figures from the city's past, people like Father Willie Doherty and Frank Curran, political figures like Eddie McAteer and  Patrick Crampsey, Paddy Shiels,  and Walter Bernard........it tells stories about the Féis Doire Colmcille and the AOH and St. Columb's Hall.  There is music and storytelling and family drama and children's games and ghost stories.  The GAA and the Gaelic League and Éoin McNeil and the IRA all feature.....Liam Brady tells the story of the Irish War of Independence from a Derryman's perspective.

The books takes a closer look at Derry from the 1890s through the 1960s and examines the ways Catholics and nationalists drew from the past to orient themselves, to galvanize around contentious politics and, in many cases to maintain an Irish identity  and negotiate complicated realities of living in (what became after 1922) a partitioned state. The project took shape when I realized that in this Catholic-majority city, the memorial landscape before the 1970s really didn't seem to tell nationalists' stories or mark their spaces.

I was inspired by Diana Taylor's idea of the repertoire (as opposed to the archive) and started to look for historical evidence of memory practices that were performed through rituals, oral traditions, performances and through local history chronicles.   When looked at from that angle, memories wove through nearly every aspect of Catholic and nationalist life in Derry.  This book is an effort to investigate the threads on their own, and also to demonstrate the ways they came together as testament and guide for community life.

The book brings together my background in urban and public history and my own experiences in Derry that started long before I went back to school to study history. It centers around  a few key questions that might be interesting to different kinds of readers--- questions about social change movements, about how historians can chart/track the ideas of people who didn't hold a lot of political power and thus didn't leave a large archival footprint; and questions about how  a city's streets and alleyways become battlegrounds over representation.  Here are some of the questions I asked myself -- and tried to answer in a responsible way -- in the process of writing this book: