- September 01, 2017
I copied over this article from the UMass History Dept blog.

In 2015, I set off for south-central Tennessee’s South Cumberland plateau to take up a two-year  Mellon fellowship with the Collaborative for Southern Appalachian Studies at Sewanee: the University of the South.  The Collaborative, a partnership with Yale, envisioned starting and sustaining multidisciplinary, community-engaged, curricular projects that had place as their focus. In other words: pretty much any public history endeavor would fit the bill. 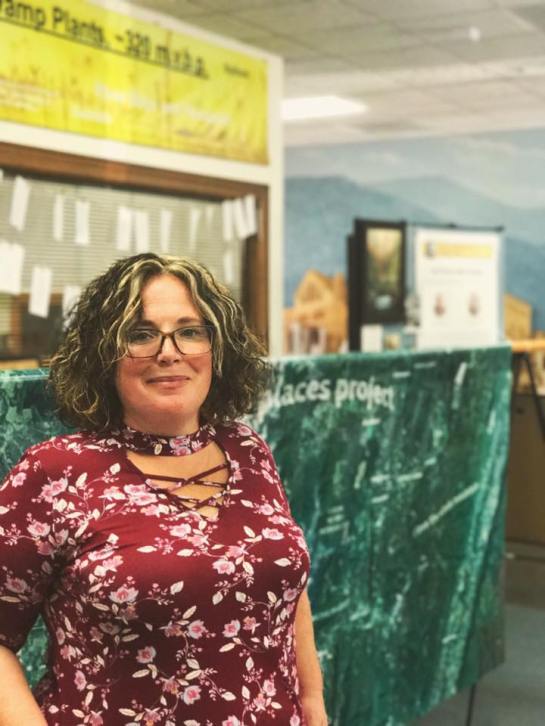 I had some basic goals for my Mellon project.  I wanted it to be something I could begin and complete in two years.   I wanted it to be digital.  I wanted it to engage local history and memory.  I wanted students with different interests and strengths to have meaningful roles to play.  Most of all, I wanted to undertake a humanities project that the pragmatic people of the region would see as useful — if not while I was doing it, then at least when it was done.  The long and tortuous history of scholars traveling to Appalachia to study its cultures and leave again seemed like another link in the chain of extractive industries and weighed heavily on me; I hoped to contribute something through my work.

I did not arrive as a scholar of Appalachia.  I am not even, strictly speaking, a U.S. historian.  Prior to Sewanee, my major research and project experiences were in Northern Ireland.  When I discussed this opportunity with David Glassberg, my mentor, he said, “You are a scholar of place and memory whose first project was in Northern Ireland and whose second project will be in Appalachia.”  I was given a chance to broaden and deepen both my scholarship and my public history practice.   It is a rare and wonderful thing to be handed an opportunity to create a project and to have lots of time and money to make it work. The flip side, of course, is that if it fails, fingers are inevitably going to point at you.  Hanging my professional identity on the hook made it all a little scary but exciting.

The Places Project  emerged  and evolved as a crowd-sourced placemaking project.  A series of digital maps, it collects, shares and preserves stories of places that matter to the people who live and work on and around “the mountain:” south central Tennessee’s South Cumberland plateau.  In eighteen months, it engaged college and high school students and community members to create of a “people’s map” of 600 stories and reflections of significant places and why they matter.   During this time, stories were collected, recorded, geocoded, sorted and visualized using Tableau data visualization software.  Online maps can be searched by a variety of variables, including community, age, theme, etc. We also constructed a physical map —  an aerial photograph of the region with pockets built into it to hold stories and photos and a series of quotations from participants’ stories written on the map itself.  We updated a Facebook page, had a website, talked it up on local television and got mentions in local newspapers.  It became a topic of conversation and a window into possibilities for local residents to think about and reflect on their stories, their histories and what they want for the future.

What made the Places Project particularly significant was the place itself.  The South Cumberland plateau is geographically, historically and culturally uniquely illegible — certainly to outsiders but also to residents.  Outcroppings, bluffs and coves mark a topographically diverse landscape, leading to the development of very small communities with little or no interaction with one another.  It is sparsely populated and is often described in terms of what is wrong with it: poverty, infant mortality, lack of educational and educational opportunity.  And it is home to the University of the South, which was founded on the eve of the Civil War by the Southern dioceses of the Episcopal Church so that young men of Southern stock could get a liberal arts education without leaving the region.  The university covers 13,000 acres, provides a liberal arts education, is a major employer and represents a place apart, with gates at its main entrance to sever it from surrounding communities.

The idea behind the Places Project was to change the story of “the Mountain.”  It invited people to share what mattered to them in a format that brought experiences and narratives together without collapsing them, privileging some over others or pathologizing their tellers.  It did not focus on the university community, nor did it exclude it.  By collecting stories at fairs, festivals and heritage events, a large cross-section of residents were able to participate. People gathered around the booth, looked at maps, listened to each other and shared stories and memories.   In many ways, the open-ended and organic participatory engagements the project made possible actually performed the very functions and forms cultural memory actually takes within community life —- establishing connections, developing usable pasts, bridging the individual and the group and producing a coherent, if oblique, narrative of community values, worries and aspirations.

The stories themselves ran from quotidian patterns: “This is my favorite place to go for a walk with my mom” to epic life-changing moments: “We got married at this construction site.  The Justice of the Peace was the contractor and this was the only time he had to do it, and we really wanted to get married.  So now it is our place.”  There were many stories of places with historical import — the site of the Irish workingman’s camp in the 1870s, the farms where German prisoners of war labored during World War II, the place where African American convict laborers were housed when they were forced to work in coke ovens, the site of the University’s first spring.  Places like the Highlander Folk School, many sites of Jim Crow segregation and a geography of local sites that were erased by the university sit side by side among children’s stories of Grandma’s cooking and memories of the baseball diamond.  In this way, controversial places could be reintegrated into the weft and weave of local history.

Some stories were funny.  One of my favorites was shared by Mrs. Barbara Mooney Myers.  She remembered the place in the yard where her mother hid coffee in an old flour bin, sneaking out to get it every morning after her husband left for work.  He was a strict Seventh Day Adventist, but Barbara’s mother always insisted that “nobody was ever kept out of heaven over a cup of coffee.”  People told stories about where they collected turnip greens to put on the family table, where they had their first kiss, where their Dad would take them for a Sunday drive.  On their own, the stories are interesting.  Taken together, they form a complex and rich tapestry of family and cultural history and create a narrative of place that is both a sum of its parts and a story about how those parts coalesce into something in its own right.

The project wanted to avoid simplified and uncritical celebrations of place and its meanings and to complicate and contextualize memories without diminishing the valence they hold.  I will continue to work on making observations about the stories themselves and am trying to make sure the project continues and the data already collected can be used locally on the mountain.  You can check out the maps here:https://theplacesproject.org/explore-the-maps/ and learn more about how the project evolved here:https://www.facebook.com/theplacesproject/
art of memory collaboration digital history digital technology history & memory memory memory and identity public art public history