On Trigger Warnings, Landmines and Memory

- May 21, 2014
Everyone's talking about trigger warnings in college classrooms this week.  This has me thinking about how we navigate "triggers" in our daily lives.

It also makes me reflect on the utter unpredictability of things -- stories, images, sounds, events --  that trigger painful and traumatic memories.  This week, we've had some insight into how those operate in places where people have experienced and lived through violent conflict.

The trigger warning issue occupies prime real estate in contemporary culture wars.  Of course it does. After all, it is highly emotive, intensely polarized and wide open for criticism on either side of the debate. Plus, it involves feminists, who always get mocked for taking things too seriously and who never take that bullshit quietly.

If you haven't been following the debate, college students across the nation are saying that they want to know which class sessions and readings/assignments will contain content or address issues that potentially trigger the onset of symptoms of post-traumatic stress disorder.  The movement to make trigger warnings mandatory got underway last February at University of California Santa Barbara. Bailey Loverin, a student, raised the issue after feeling "forced" to sit through a film that described rape graphically.  She wanted to leave because the film raised her experience as a victim sexual abuse, but felt that walking out would  be extremely public.

Since then, proposals by student senates have been presented at a wide array of colleges and universities.  The movement has its roots in feminist approaches to social media. 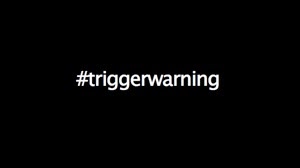 I sympathize with feminists who have championed trigger warnings as a means of creating and nurturing safer online spaces.  Websites and videos warn readers and viewers about disturbing content so they can either prepare for the possibility of being disturbed or avoid. I also tend to sympathize with the fuming academics who consider trigger warnings "inimical to academic freedom." Yes, I also think it is idiotic that The Great Gatsby might demand a trigger warning for suicide, domestic abuse and graphic violence.  And I would be really annoyed if I had to tag basically every class meeting in world history with a trigger warning --  but pretty much everything from the Haitian Revolution to the Vietnam era anti-war protests could conceivably fall under this category, right?

At the same time, I know from experience that my syllabus and course calendar serve as trigger warnings.  Sometimes students just let me know that there are things they can't watch or listen to or otherwise engage and that they will be absent as a result.  Other times, they check in with me and ask about specific contents of a documentary scheduled to be shown or query how graphic my depictions of a violent historic event might be.  I support their own awareness of their limits and encourage them to take ownership over their learning experiences as a part of the bigger picture of who they are.

Like most things in the classroom, this is a process in which we engage together. I guess I see it as a necessary part of learning. I know I could be better at teaching, and modeling, resilience and self-awareness in the face of the things that take us off balance.  I do not know, nor do I really want to find out how blanket requirements would affect this process.

While this debate was raging in the news this week, an acquaintance of mine posted on Facebook about the death of his friend. It wasn't unexpected; she was ill.  As I read  his words and looked at the image he posted of a beautiful and vibrant woman in her prime, I found myself cut to the quick, inexpressively saddened by memories of a friend who died two and a half years ago after fighting and losing her battle with cancer.  Throughout the day, I got distracted.  I read old emails from my friend, quoted her in missives to others, lingered over her Facebook page that serves as something of a memorial space.  The FB status update was undoubtably a trigger for residues of grief I didn't even know I carried.  Nothing like the experiences of those who have experienced trauma and find themselves triggered, I know.  But unsettling enough to make me think.

The same day, I had a talk with a coworker about the floods in Bosnia.  He survived the war, and started his life over in the Boston area as a refugee.  We watched some videos of the flooding and he told me a story of a woman who, for the second time in her life, had keys to a house that no longer existed.  "The first time, it was the war.  This time, it was the floods."  This time, she said, she just didn't have the energy to start over.  Her devastation was compounded by previous experience, the two inextricably intertwined.

In the words of Adnan Zubcevic, a Bosnian colleague who runs a political refugee support organization, "in this vulnerable part of the world where unemployment rates are over 50%, and economies are drowning after the war of 1991-1995 --  which reshaped the ethnic landscape of the region -- a disaster like this is just a drop too much." 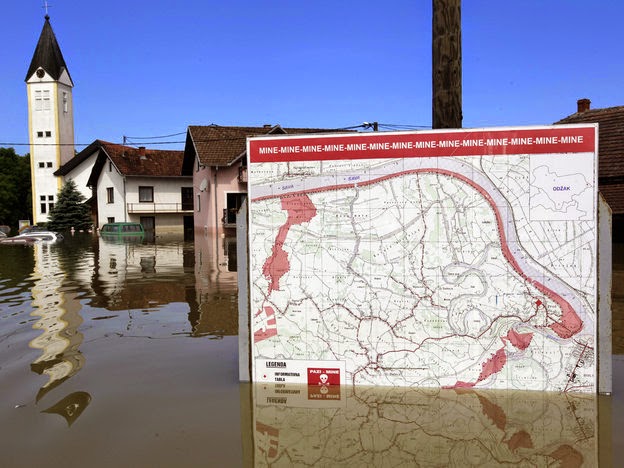 We got to talking about another kind of trigger --- the thousands of unexploded land mines planted on either side of most major rivers in what is now Bosnia and Serbia during the war.  There are over 100,000 unexploded land mines in the region -- leftovers from the more than 2 million planted during the conflict.  Not only is the erosion caused by flooding uncovering the mines, but it is also washing away the signs that marked their presence.  Today, in Brcko, one of the landmines exploded.  No one was physically hurt.

So, as people struggle to deal with the disastrous effects of the worst flooding in a century, they are simultaneously confronting, in a very real way, the legacies of war.  From displaced land mines erupt buried memories. It is messy, muddy, complicated and utterly unpredictable and demands different sorts of resilience than people may be accustomed to or prepared for.

It is this displacement that strikes me as significant  -- for individuals, communities and societies grappling with difficult histories.  One day, everyone knew where the land mines were (literal, but also metaphoric) and that made coping with their ubiquity somehow possible.  The next day, they didn't, and the prospect of PTSD symptoms seems extremely likely.

Displaced "land mines" are what students are trying to control. I am not sure they can. Triggers are not to be taken lightly.  And they are utterly unavoidable.