Art of Memory: On May Day


On May Day, I always take a moment to read the piece below, written by Eduardo Galeano, whose writing intertwines in so many ways with memory, as I've discussed here.
Long before I sat in a public history class, it was this piece that brought home to me how power constructs memorial narratives and made me wonder if reshaping memorial narratives might alter the architecture of power.  I've become more cynical about that over time, but I still love this prose poem.

‘It must be around here,’ they tell me. But nobody knows where.
No statue has been erected in memory of the martyrs of Chicago in the city of Chicago. Not a statue, not a monolith, not a bronze plaque. Nothing.

May 1st is the only truly universal day of all humanity, the only day when all histories and all geographies, all languages and all religions and cultures of the world coincide. But in the United States, May 1st is a day like any other. On that day, people work normally and no one, or almost no one, remembers that the rights of the working class did not spring whole from the ear of a goat, or from the hand of God or the boss.

After my fruitless exploration of the Haymarket, my friends take me to the largest bookstore in the city. And there, poking around, just by accident, I discover an old poster that seems to be waiting for me, stuck among many movie and rock posters. The poster displays an African proverb: Until lions have their own historians, histories of the hunt will glorify the hunter.

---- As an historian, I feel the need to complete the story.  The first memorial to Haymarket was erected in Haymarket Square to honor the seven policemen killed in the riot (one instantly by the bomb) and dedicated on Memorial Day 1889.  It was driven into once by a streetcar, purportedly by a streetcar driver tired of looking at it.  The statue was bombed twice - once in 1969 as part of an SDS protest, again in 1970 by the Weathermen, who took responsibility saying,"We just blew up Haymarket Square Statue for the second year in a row to show our allegiance to our brothers in the New York prisons and our black brothers everywhere. This is another phase of our revolution to overthrow our racist and fascist society. Power to the People."

The police statue was moved around for a couple decades.  During Vietnam War protests, it was defaced with black paint.   and now sits in the courtyard of the city's police academy. For years,  just the base was left, and it was eventually covered with graffiti and surrounded by litter.

In 2004, a new statue to Haymarket was erected.  It doesn't honor the martyrs, but it does mark the 1886 workers' rally that set events in motion.  Designed by Mary Brogger, a Chicago sculptor, it depicts life-sized human figures around a wagon that is in pieces.  A wagon had served as the platform for rally organizers. 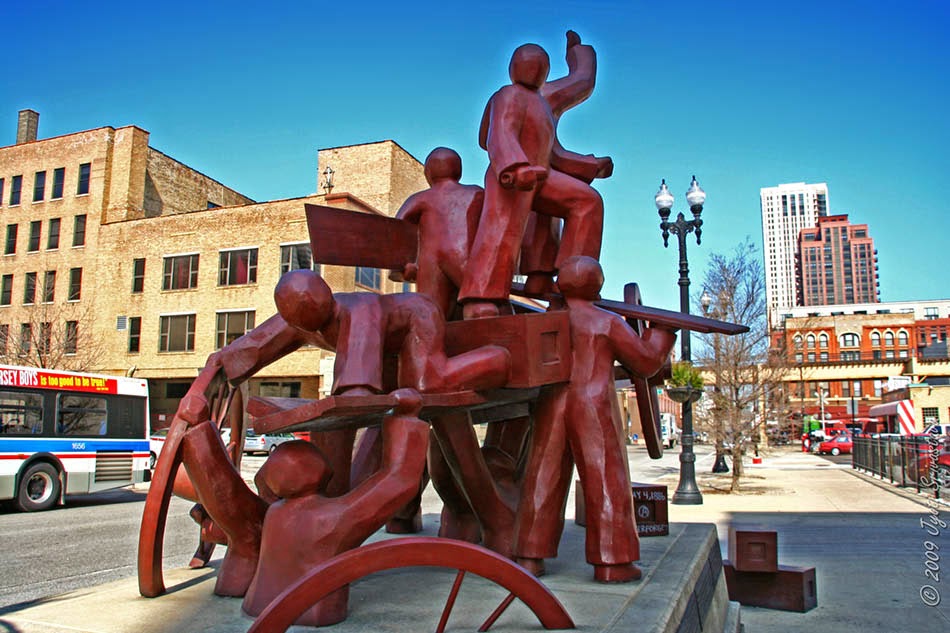 City public art administrators suggest that Chicago needed a statue both to put the issue to rest and to appeal to tourists who come from all over the world to see the site of the Haymarket tragedy. At the event, someone -- unknown still -- lobbed a bomb at police who were massed near the square to breakup the peaceful meeting of workers, labor leaders and anarchists.


The 'Haymarket Eight,' those who were arrested and charged with the bomb are not memorialized.

So, do the lions have their own historians yet?
art of memory Eduardo Galeano history & memory public history