May Ethan Schmidt Rest in Peace. The Rest of Us Should Not.

And twenty four hours later, it is over. 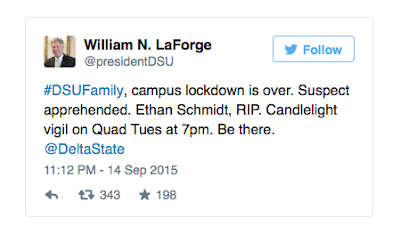 Thirty-nine year old historian and history professor Ethan Schmidt was shot and killed in his office yesterday morning on the campus of Delta State University.  Bright, hard-working, part of a constellation of many personal, professional and public circles and communities...

And now he is dead.  The most recent headline.  The flashiest of victims of gun violence this week.  Maybe.  The week is still young.  You never know.

But, hey, there's a candlelight vigil.  Before we move on.

Schmidt was murdered by a colleague.  All evidence points to this as a deeply personal killing.


Then why am I taking it so personally?  And why do I feel as if it is very very very public? Me -- who didn't know Schmidt or his murderer, who doesn't live in Mississippi, who has never stepped foot on the campus of Delta State?  Heck, I haven't even read Schmidt's book.*

Well, he was an historian and a history professor --- one of my tribe.  He was going about his day in a way that was probably, from the time he reached campus, very similar to the ways I go about mine.  Like Dr. Schmidt, I've spent the vast majority of my career at public universities, like Delta State. We are of the same vintage.

It could have been me.

I assigned Ken Foote's Shadowed Ground: America's Landscapes of Violence and Tragedy this week.  So we've been talking about how we as Americans make sense of violence.  What kinds of stories we tell ourselves about it.  Which acts of violence deserve to be remembered and commemorated, which acts are erased and obliterated from the landscape, left as the burdens of individuals instead of the collective. Which acts we accept as significant in shaping who we are, who we will become.

Schmidt stands out for me, but he is one of a crowded collective of the dead.  Victims of public gun violence.  As one of his mentors, Jonathan Earle, wrote, "That someone who so well understood American violence in one century became a victim of it in ours is both ironic and deeply sad."  In the past month alone, Americans have been shot and killed at army recruitment centers, at movie theaters, at outdoor shopping malls, on college campuses.

We wring our hands.  We debate whether guns kill people or whether people do.  We moan and worry and ponder.  We debate the Constitution.

We forget their names.  They are replaced by a new set of victims.

And meanwhile, our freedoms are curtailed.    As my husband, Matthew Barlow, reflected, "With each and every shooting, my sense of security gets chipped away a little more. Each and every time I step into a classroom I assess whether or not I and my students will be safe in there if there is a shooter on campus. I look for places to hide, how to barricade the door, cover up windows, turn off the lights, escape routes. Why? Because the gun lobby in this country thinks everyone should have access to guns."  And my friend, the political scientist Melissa Bass wrote yesterday, "It doesn't seem unreasonable to ask to be able to go to work, to school, for a drive, for a walk down the street, or, for god's sake, to bed -- without fear of being shot."

(*I am going to read Dr. Schmidt's book now, by the way.  One of my students reminded me of a Bansky quote this week:  "I mean, they say you die twice. One time when you stop breathing and a second time, a bit later on, when somebody says your name for the last time.”  I'll probably even assign excerpts.  To keep him alive, to keep his ideas and thoughts and research alive.  To remind myself that he was killed because of gun violence and to force myself to continue to ask myself what I am doing about that.*)
history memory social justice violence